What is the procedure?

PTK, or phototherapeutic keratectomy uses an excimer laser to reshape or resurface the anterior corneal layers. Excimer lasers are used to ablate or remodel the anterior corneal tissue. The cornea has five layers: epithelium, Bowman’s layer, stroma, Descemets membrane, and endothelium. The epithelial can regenerate or re-grow into place, leaving a more uniform and predictable topographical pattern. The various indications include both therapeutic and visual

When and Why Do It?

The key to a successful outcome depends on proper case selection. Systemic diseases such as uncontrolled diabetes, collagen vascular diseases like rheumatoid arthritis, and systemic lupus erythromatosus may have delayed epithelial healing. Corneal diseases limited to anterior stroma are amenable to treatment. Mitomycin C (MMC) is used as an adjunctive treatment to prevent recurrences. Most common PTK conditions treated include:

We do PTK for both visual and therapeutic reasons. Visual improvement after PTK is due to reduced density or removal of a scar and reduced irregular astigmatism. There may be a reduction in UCVA due to induced refractive errors, but the best corrected visual acuity (BCVA) improves. The clear cornea may help in accurate keratometry for intraocular lens (IOL) power calculation. PTK improves symptoms of pain, watering, and foreign body sensation in RCE, in dystrophies, bullous keratopathy, and spheroidal degeneration.

Corneal diseases limited to anterior stroma are amenable to treatment. Salzmann nodular degeneration (SND) is characterized by the presence of bluish-white peripheral nodules raised above the corneal surface, slowly progressive, more common in females with longstanding scars and chronic uveitis. The raised surface may be associated with tear film abnormality, irregular astigmatism, and difficulty in contact lens fitting. Surgery is the only treatment.

Bullous keratopathy is characterized by bullae formation and its rupture, resulting in symptoms of pain, foreign body sensation, watering. The treatment is two-fold symptomatic relief and visual improvement. The first goal of symptomatic relief is with hyperosmotic agents, bandage contact lens (BCL) or with anterior stromal puncture (ASP), AMG, PTK, ASP with AMG, and PTK with AMG. The second goal is visual improvement. PTK is a very promising and effective treatment for bullous keratopathy and can also be repeated

Phototherapeutic keratectomy is indicated for anterior basement membrane dystrophies (ABMD) and stromal dystrophies for both symptomatic relief and visual.

improvement. Dystrophies being central, the ablation profile of PTK mimics myopic correction and thereby induces hyperopia. This depends on the amount of ablation depth. Also, intraoperative application of MMC helps prevent recurrences. PTK works well for recurrent epithelial breakdown or recurrent epithelial erosions. This occurs when the epithelial attachments to the underlying stroma are loose and eventually break.

Superficial anterior stromal avascular scars (less than 100 microns), are amenable to treatment by PTK. These scars may be post-traumatic, post-infectious or post-pterygium excision. The aim is to improve vision and delay or obviate the need for keratoplasty. Scars after healed bacterial or fungal keratitis can be treated with PTK.

HOW IS THE PROCEDURE DONE?

The technique of PTK varies according to the underlying pathology, size, and site. Hence, it is better explained as a common method first and then the specific technique in the specified pathology can be modified as described. The procedure is generally done under topical anesthesia, unless some additional surgical procedure is combined with PTK. The procedure is done under strict aseptic precautions. After applying the wire speculum, the epithelium is debrided manually with a hockey stick knife. The epithelium comes out easily in bullous keratopathy. Some surgeons do use alcohol for the debridement of the epithelium. After debriding the epithelium, ablation is performed either by asking the patient to look into the fixation light or a laser is centered manually. A few visual and auditory signals during the procedure may help in guiding the extent of the treatment. A snapping sound is heard when the tissue is ablated. Usual treatments last 15-90 seconds. 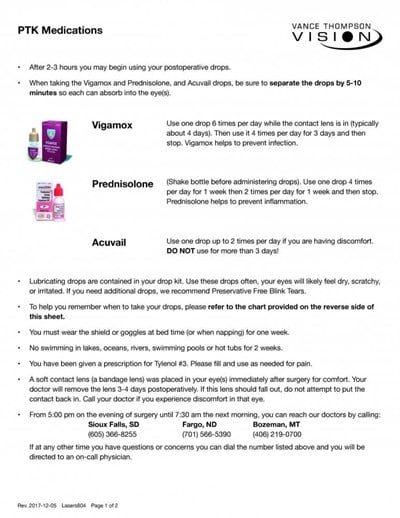 The patient is given a prescription for a narcotic pain reliever (to use for pain) and cold compresses are encouraged especially on the temporal region. These can help for those patients with more discomfort. The patient is evaluated at one day to assess vision and monitor epithelial healing. Patients are warned that vision may take a few steps backward over the next several days as the epithelium moves centrally and crosses over the pupil. A smooth epithelial-leading edge should be noted under the contact lens, and epithelial growth of up to 20% can be seen at one day. The patient is re-instructed on the drop regimen and is scheduled to be seen 3 days later. At the four day appointment, the epithelium should be intact or at least very close. If a fairly large, greater than 2 mm epithelial defect is present at 4 days, suspect a slowing of epithelial growth.

If a delay in epithelial growth is suspected we recommend reducing the steroid and discontinuing NSAID use, continue the bandage contact lens, increase lubrication and follow daily. Refrain from discontinuing the steroid completely in order to minimize the chance of a sterile infiltrate. The combination drop (Pred/Moxi) can be reduced to BID to decrease steroid use, but our preference would be to switch the patient to two drops, a fluoroquinolone (Vigamox) and Prednisolone Acetate, so steroid use can be controlled but not sacrificing antibiotic use.

Protocol for Delay Epithelial Closure: **If not re-epithelialized by 6 days call to schedule to be evaluated in our center

Typically, the epithelium will seal with a small centrally located epithelial ridge. It can be star shaped or linear, will usually pick up stain and depending on where the ridge is located, it can have varied effects on vision. Once re-epithelialization has occurred, the bandage contact lens is removed. The use of consistent daily and night-time lubrication will help promote continued epithelial healing and adherence, as well as aiding in the epithelial remodeling that occurs following PRK. It is this epithelial remodeling that will continue to improve the patient’s vision with time.

Side Effects and Post-Op Complications

Post-operative complications can include, infection, slowed or non-healing epithelial defects,persistent epithelial ridge formation, steroid response, under and over-correction, anteriorreticular haze, and recurrent erosion.Infection rates with PTK are extremely low, but with the large epithelial defects that we aredealing with, patients must be monitored closely and treated aggressively to prevent loss ofvision or corneal scar formation from a virulent infection. Any infiltrate notedduring healingshould be brought to our attention and referred in for evaluation.

As we talked about in the previous section, if slowed or non-progressive epithelial healing isdetermined, we increase lubrication and decrease anti-inflammatorymedication to promoteepithelial healing. Using this medication protocol along with continued bandage contact lenseswill usually promote epithelial healing and the defect should seal within several days. If theepithelium is still not sealed after 6 days, the patient should be scheduled back with us at therefractive surgery center for evaluation and treatment.

Commonly, a central epithelial ridge will form where the epithelial edges seal together. Thisridge usually smoothens itself out over the first 2 to 4 weeks post-operatively. If the ridgepersists and is blurring vision at 4 weeks post-op, we discuss with the patient that we may needto mechanically remove the aberrant epithelium to grow smoother and more viable epithelium.

A persistent epithelial ridge could lead to an elevated central island of tissue and causesignificant visual problems.Some believe steroid use following PTK is important to help reduce the potential for aggressivehealing and corneal haze formation. The smoother ablation patterns of advanced lasers andintra-operative treatment with anti-metabolites have helped reduce the risk of haze. Therefore,our current impression is that patients do not need extended steroid treatment in order to reduce the chance of haze. Since we recommend discontinuing steroid use after 2 weeks, steroid responders with elevated IOP should be very rare. We recommend waiting at least 2 weeks before performing applanation tonometry (unless you are noting signs of elevated IOP), to help reduce the risk of damaging the healing epithelium.