What is the procedure?

Cross-linking of collagen refers to the ability of collagen fibrils to form strong chemical bonds with adjacent fibrils. In the cornea, collagen cross-linking occurs naturally with aging due to an oxidative deamination reaction that takes place within the end chains of the collagen. It has been hypothesized that this natural cross-linkage of collagen explains why keratoectasia (corneal ectasia) often progresses most rapidly in adolescence or early adulthood but tends to stabilize in patients after middle-age.

In addition to the cross-linking that occurs commonly with corneal maturation, there are several other pathways that can lead to crosslinkage. Glycation refers to a reaction seen predominantly in diabetics that can lead to the formation of additional bonds between collagen. In the pathway most relevant to this topic, oxidation has been shown to be able to trigger corneal crosslinkage through the release of oxygen free radicals.

The bases for the currently employed corneal collagen cross-linking techniques were developed in Europe by researchers at the University of Dresden in the late 1990's. UV light was used to induce collagen cross-linking in riboflavin soaked porcine and rabbit corneas via the oxidation pathway. The resultant corneas were shown to be stiffer and more resistant to enzymatic digestion. Investigation also proved that the treated corneas contained higher molecular weight polymers of collagen due to fibril crosslinking. Safety studies showed that the endothelium was not damaged by the treatment if proper UV irradiance was maintained and if the corneal thickness exceeded 400 microns.

Human studies of UV-induced corneal cross-linking began in 2003 in Dresden, and early results were promising. The initial pilot study enrolled 16 patients with rapidly progressing keratoconus and all of the patients stopped progressing after treatment. Additionally, 70% had flattening of their steep anterior corneal curvatures (decreases in average and maximum keratometric values), and 65% had an improvement in visual acuity. There were no reported complications.

Currently, corneal collagen cross-linking is not fully FDA approved in the United States. Ophthalmologists in the US were anticipating possible approval of the technique pending the results of a multi-center phase 3 clinical trial in 2011, but the completed study has still not been published in its entirety.

In late 2011, orphan drug status was awarded by the FDA to Avedro for its formulation of riboflavin ophthalmic solution to be used in conjunction with the company's particular UVA irradiation system. This may entitle the company to up to 7 years of exclusive marketing of corneal crosslinking in the United States. Avedro submitted a filing with the FDA for further approval, and in March 2014 Avedro received a letter from the FDA requesting additional information before making a decision on granting New Drug Status (NDA) for Avedro's riboflavin ophthalmic solution/KXL® system.

When and Why Do It?

The primary purpose of crosslinking is to halt the progression of ectasia. Likewise, the best candidate for this therapy is an individual with a progressive ectatic disease of the cornea. The most common indication is keratoconus. Other diseases that may be candidates include Pellucid Marginal Degeneration, Terrien Marginal Degeneration, and post-refractive surgery (such as LASIK or Radial Keratotomy) ectasia. There currently are no definitive criteria for progression, but parameters to consider are change in refraction (including astigmatism), uncorrected visual acuity, best corrected visual acuity, and corneal shape (topography and tomography).

Research has proven the cornea will crosslink itself at an older but unknown age around 65 years old. Patients who are under this age and show progressive corneal thinning should have corneal crosslinking to stabilize or “freeze” the cornea into place. There is no magic number on the eye chart for vision or for keratometry readings where a patient is ready for crosslinking. In younger patients with ectatic or keratoconus changes these patients should be seen as soon as possible. Two things to consider: if the patient corrects well in glasses or soft contact lenses it is really important to stabilize this cornea to maintain this ability, and second if a patient corrects to 20/40 or better in a specialty contact lens he/she should have crosslinking to try to avoid or delay a full thickness corneal transplant.

HOW IS THE PROCEDURE DONE?

The primary goal of the first stage of therapy is to allow riboflavin to diffuse into the cornea. While there are several variations on the techniques used to accomplish this, all entail either removing or weakening the epithelial barrier of the cornea. In all instances the patient is first given anesthetic drops. A lid speculum is placed. After disrupting the epithelium, drops of riboflavin 0.1% (vitamin B2) are given at intervals of 2 minutes for 30 minutes, or until riboflavin can been seen in the anterior chamber of the eye by use of the blue filter on slit lamp examination.

After adequate absorption, riboflavin drops are given every 2 minutes during light delivery. Distance from the corneal apex is 9cm vs 3-5cm. There is a plethora of research being done on different wavelengths of light as well as different exposure times. Following irradiation, antibiotic drops are given and a bandage contact lens is typically placed. The patient is given antibiotic drops to use postoperatively QID. The post-op schedule is very similar to a PRK follow-up.

Post-operatively these patients should expect photophobia, epiphora, burning pain, gravely eyes, and stinging upon instilling drops. Patients often will have sore and irritated eyes for 4-7 days depending on the patient pain tolerance. Vision will be blurry afterward until the epithelium heals and flattens and/or the bandage contact lens is removed.

The post-operative appointment schedule is very similar photorefractive keratectomy (PRK). The patient will have a 1 day appointment, 4-7 day follow-up, 1 month, and 3 months at our clinic. The bandage contact lens is usually removed at 4-7 days post-op. Post-operatively the patient will be on an antibiotic, a steroid, and a short-term NSAID.

Vance Thompson Vision has two drop regimens and will be determined by the VTV Dr. doing the procedure. 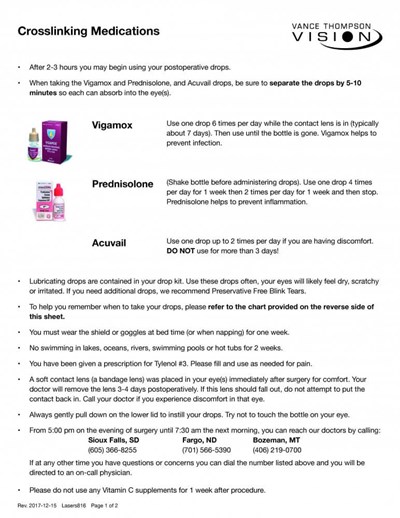 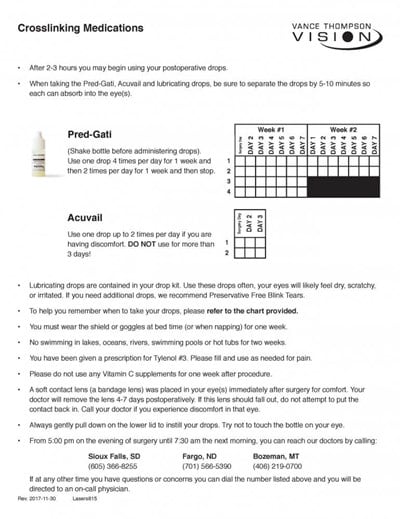 Side Effects and Post-Op Complications